Every thing makes me weepy. That’s the nature of loss. You feel it. Impending loss is cruel. It lingers in the foreground and in our case there is no arrival date. For 3 years now we’ve carried the best guess of this or that doctor.

I rejoice that the first declarations of our impending loss were way off base. That doctor gave us weeks. God responded with years. Blessed years so The Boy got to know my Dad, his Papa, better. Time spent together sharing things Dad wanted us all to know. He has told me so many wonderful things, he has spoken those kind of words we think in quiet moments but the joy of living finds few windows to speak them. 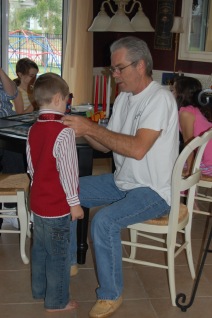 I come from a messy family. We sin and we sin hard. We love and we love deep. These are drastic spikes on the emotional scale. Is it any wonder we all struggle a bit with depression. You won’t find us coasting, we just don’t coast. My Dad never coasted. I love the story of his pursuit of my Mom. It was all in, hard pursuit. He’s told me many times how he loved her from minute one. He always told me he was a “one woman man” and he didn’t want anyone but her. Their 39 years have been hard fought. My brother and I have had box seats. It was war. I never cheered for a war more than I have on the sidelines of that marriage. They did it. The battleground they gained paved a path for my own marriage.

When Daddy realized the nature of his cancer he went about telling us all what he wanted us to know. One day he sat me down to tell me the story of my birth. Now, I have heard the story of my near abortion. My mom has shared over and over again the divine intervention that occurred in an abortion clinic while lying on a sterile metal table. The voice that she heard, almost assuredly audible, telling her if she had this baby God would take care of her. It changed Mom’s life forever and her faith, in that moment, gave me a chance at life. Yes, this story I had been told but I had never heard it from my Dad’s point of view.

It was a bright sunny day and Dad still looked like himself. He had lost a lot of weight but he was his usual rugged handsome, wearing his favorite levis and standard harley shirt. He sported his signature mustache and on his neck a bandage covering where he had recently had a port inserted under his skin for upcoming treatments. He wanted to have a heart to heart talk. We were just facing the reality of cancer. I was full of hope yet the impending loss already dangled large in our future. The hope side of me longed to silence his words. They felt like goodbyes. He was insistent so I sat across from him on the couch to listen.

“Honey, I want to tell you about your birth. I have never told you my side and I want you to know.”

I wish with all my heart I had gotten the video camera out. I regret I didn’t put him on hold and do just that. He proceeded to again share his love for Mom. How it was the summer before her senior year of high school when she told him she was pregnant. He responded with great joy. He told me how excited it made him. He wanted to get married. She didn’t think they could actually do this family thing. She was certain it was better to save a child from teenage parents. 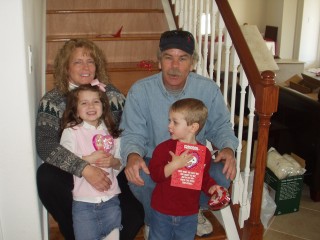 He agreed to help her however she needed him. She made an appointment but he said it pained him greatly. He felt it was wrong and he didn’t know where to go with it all. A new follower of Christ he decided to go on his knees. He shared the facts with his mother and she joined him in prayer. He told me he wanted me from day one and he prayed with all he had that God would work to save my life. He drove her to that clinic and he watched her walk down the corridor always petitioning God on my behalf.

“I prayed like I had never prayed before. I just knew if there was a way to change this outcome that God could do it. When your mother came out of the room and told me she wanted to marry me and have this baby I couldn’t usher her fast enough out of that place. God answered my prayer.”

Daddy went on to tell me things he had told me over and over in my lifetime. He loved me. He wanted me. He adored me. He treasured all our days together. My Daddy has been all a knight in shining armor should be. He fought for me, he protected me, he treasured me as a helper. I have spent 38 years toiling at all kinds of tasks joyfully at his side.

Now I will help him rest comfortable until God calls him home. I am so grateful for all his prayers that day to usher my life into this world. It’s  just way too soon to be sitting at his side praying for him as we wait for the doors of eternity to open and usher him home. 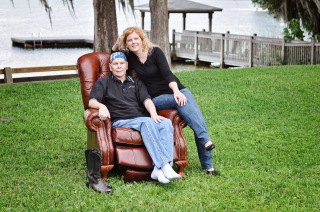